Provectus Environmental Products, Inc., (PEP) conducted a pilot remedial design at a former manufacturing facility in Ridgefield, NJ. The following discussion concerns the efficacy of the remedial event that occurred the week of December 26th, 2011. The site has since proceeded to the full scale remedial design.

The injection program at the site included 34 direct push points in the locations proposed and injected 5,555 gallons of solution including 2,701 pounds of ZVI, 1,850 pounds of wheat based fermentable substrate, 407 pounds of Kelp powder, 925 pounds of propionate, (Provectus –IR) 1850 g of Vitamin B2, 266 g of Vitamin B12, 370 pounds of yeast extract and 370 pounds of nutrient and sulfite across the site.

The injection event was designed to exhibit treatment efficacy at the former manufacturing site to treat soil and groundwater contamination in the above treatment area which includes a few monitoring wells at varying depths. The following discussion addresses the monitoring points that were sampled during 2012 sampling events. Below is a discussion on the geochemical and analytical results from the pilot scale remedial event.

Monitoring well MW-8 is located in the southern area of the pilot scale remedial treatment area and offers compelling data in support to the biotic/abiotic approach implemented at the site. MW-8 was sampled at approximately 5.75 feet bgs, within the vertical treatment zone of 4-10 feet bgs.

Ethane production in-situ under reducing conditions may be produced biotically only as a result of reductive dechlorination of chloroethanes, whereas it may also be evolved abiotically via the ZVI component of the program. The transition of the dissolved gas data from the abiotic portion of the program to the biotic is most clearly seen 60 days into the program.

The increase in temperature over the final 60 days of the pilot clearly demonstrates the influence of temperature on the kinetics of the biological mineralization process in which there is a doubling of the rate with every ten degree Celsius rise. Dissolved gas concentrations were elevated during the baseline sampling event, however the injection of organic hydrogen donors and ZVI did not increase the production of methane over the course of the pilot scale testing.

Monitoring well SP-2 is located in the northeastern area of the pilot scale remedial treatment area. SP-2 was sampled at approximately 6 feet bgs, which is within the vertical treatment zone of 4-10 feet bgs. SP-2 has exhibited a balanced biotic/aboitic environment, with ZVI surface mediated remediation of the dissolved phase CVOCs and its corrosion products synergistically working with the biologically mediated portion of the program. Ethane production as a consequence of the ZVI is still evident six months into the program; hydroxide production from the hydrolysis of the water at the surface of the ZVI continues to be evident by the elevation of pH as late as the June 2012 sampling event. 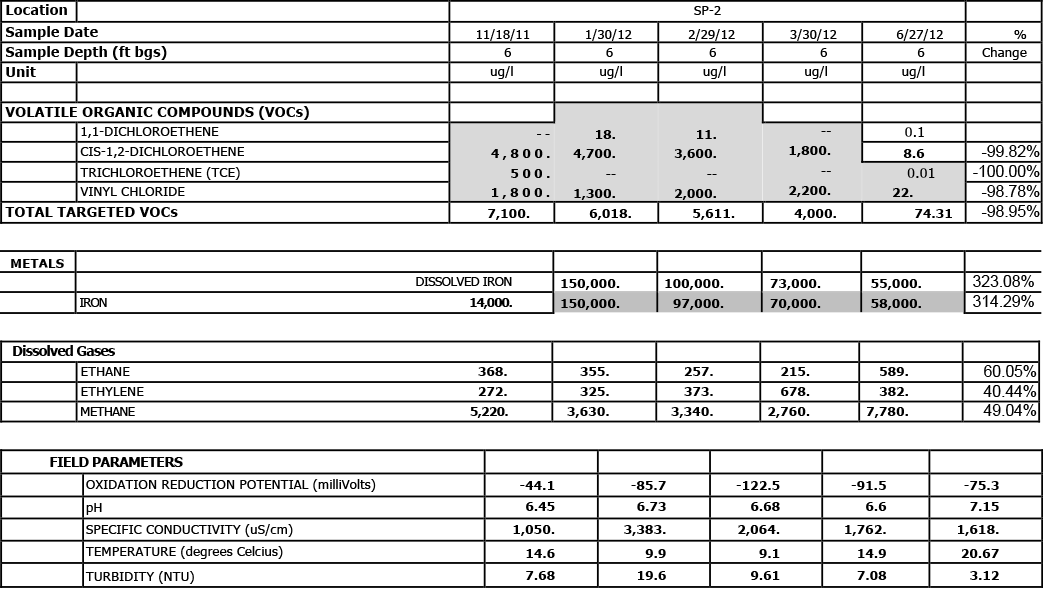